Home > What is BWRT?

BWRT® – BrainWorking Recursive Therapy® – is a new model of psychology and psychopathology that fits comfortably with current thinking on neuroscience. Developed by Terence Watts in 2011 after 35,000 hours of experience working with clients, it is determinedly solution-focused and evidence-based, thus fulfills the requirements of modern therapies.

It's fast, effective, and long-lasting - usually permanent - and doesn't require the client to tap, pinch, breathe in a special way, operate an anchor, trigger or any other form of post-therapy device. It just works.

Based on Neuroscience Research

The original inspiration for what was to become BWRT came via an article in the New Scientist magazine in November 2011, about the experiments of Benjamin Libet in the early 1980s. The experiments appeared to prove that we dont have free will in the way we usually think of it - though we do definitely have free won't. That is, you can stop an action after it has started but you have no conscious control over the impulse arising in the first place.

The reports of Libet's experiments created howls of outrage and there were many attempts to dispute the findings. None of them were entirely successful, though, and as more advanced imaging techniques became available, it became obvious that there was, indeed, a 'cognitive gap' where the brain was starting to create a response before conscious awareness.  The following links give you a clear view of the amount of research which has now been carried out:

The truly exciting thing about BWRT is that it works directly in that 'cognitive gap' before conscious awareness. So where more standard therapies will be seeking to access the anxiety-triggering amygdala via conscious processes, BWRT works from the other end of the scale - in the very early brain before the amygdala has even received the message!  We work with the Reptilian Complex, AKA Lizard Brain, which for 650 million years or so has been and still is the first responder in all sentient animals. It's far speedier than even the fastest thought in response to any stimulus but especially to threats against survival, be they real or simply perceived.

BWRT is now in use all over the world, by psychologists, hypnotherapists, medical practitioners, pyschiatrists, counsellors and more. It is in regular use by the psychologists in a South African Police Force, thanks to its abilty to resolve even quite severe PTSD in a session or two getting officers quickly back on the road.

It's in use in correction facilities, hospitals, university departments and schools, as well as by thousands of professional therapists in private clinics.

It has a featured chapter in the academic book The Bright Side of Shame (published by Springer) and was the subject of a 2018 Ph.D. awarded from Lincoln University in the UK.

The 'engine' of BWRT is a naturally occuring brain state, the 'Freeze' response, a 'synthetic' version of which is induced therapeutically and without trauma. Then we use the primary communication processes of the early brain to reorganise and neutralise the response(s) associated with the presenting symptom.

The results astound even from the very beginning - here's a screen shot of a social media post from a 'newbie' who had completed training only two weeks previously: 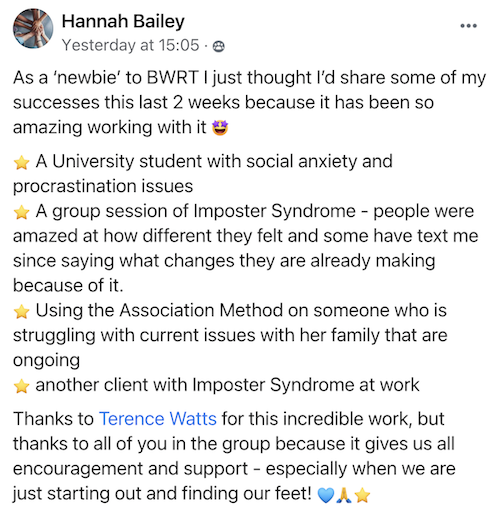 And at the other end of the scale we have Dr Feroza Arbee, a Psychiatrist in South Africa who says:

" BWRT has changed the way I practice. It is an effective, time-limited intervention that has frequently resulted in fewer patients needing psychiatric medications. Those who need medication frequently need lower doses AND it offsets the need for hours and hours of costly and time-consuming psychotherapy...  Furthermore, with a medical and scientific background, I am finding more and more uses for BWRT, than was originally envisaged or intended by Terence Watts."

Click here to see more comments from the experts.

There are three levels of training but you can start getting fantastic results right from the very start.

Click here to learn more about BWRT® if you are a therapist.

The only problem with BWRT is that it seems just too good to be true, especially to those who have lengthy experience in the field of psychology. It is often held that thought patterns in the brain take a long time to change and even longer to change permanently.

Well, that used to be true... but that was because all the older therapies worked directly at seeking to change the thoughts at the 'thinking end'. It's a bit like trying to turn off the water supply to a hose by adjusting the nozzle. You might be able to stop the flow but the presure builds up and it's only a matter of time before the inevitable happens.

But BWRT turns off the tap.

This process really does defeat that old adage that "if it seems too good to be true, it probably is." It really is all that is claimed for it!

It's now ten years old and growing stronger all the time - so check out our training page today!

Click here to read what makes BWRT® so different.

Looking for BWRT therapy instead of training?


We have practitioners in many parts of the world, many of whom work via Skype or similar so if you have difficulty travelling or talking face-to face, BWRT® can still help you.